Dynasty appraised 92 EEEE.  Although only 20 in height this doe is remarkable!  She is a gorgous doe though she only has one championship leg, we think due to her stature (even though as Abigail always says stature is only 2 points) She freshened with twin does this year!

September 2016
This is yet another very correct Zheng daughter. We were so pleased when she appraised LA 03-06 90 EVEE as a three year old milker. In addition to her nice appraisal score, This year at the BIG SHOW (State Fair Open Show) This little powerhouse of a doe was selected as BUOB and was in the running for BUIS. Dynasty is even smaller than her sister Cho Chang (scoring an 18 in stature as a 3 year old doe) but she is soo impressive check out her udder! 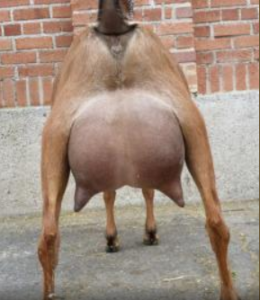 2015
Dynasty freshened with twins. Another year of maturity some additional growth and Dynasty is coming along nicely!

This is an exciting young doe. Freshening as a small yearling with a tiny single doe kid she was very correct but immature. We kept her because we loved the genetics behind this doe and had a gut feeling she would mature into something special. We think she is doing just that. This doe may have the most correct overall udder of any goat in the herd. Remarkably well attached, long and smooth in the fore, high and wide in the rear, carried tightly into the escutcheon. We think she is beautiful and hope you will too.